Show all categories Humour Back
back to overview
Michael Becker:
Picture "Linda in the fog" (2015) 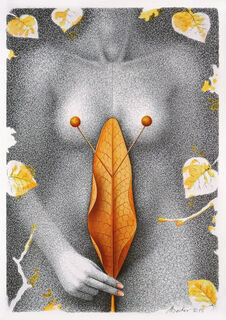 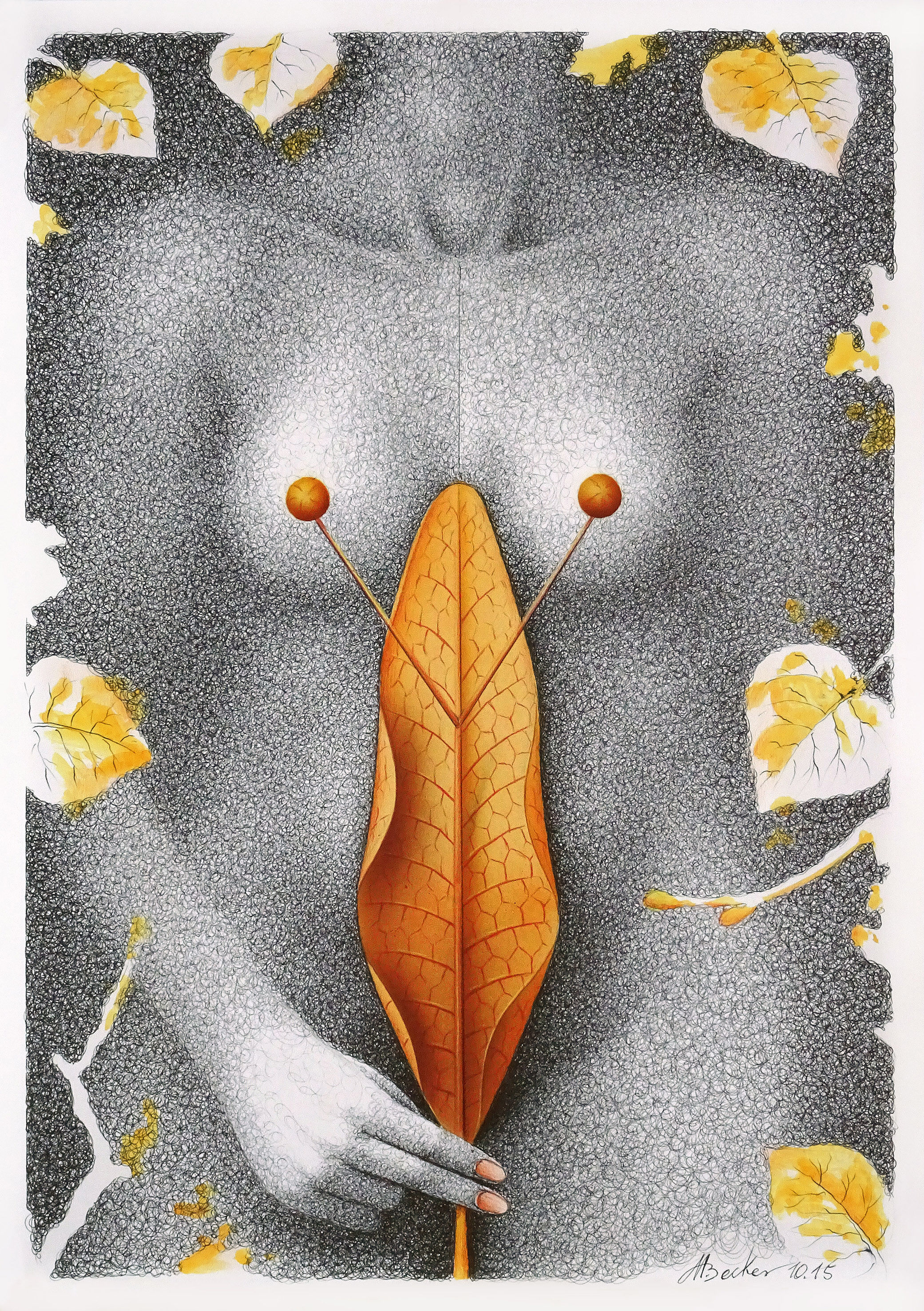 A woman's body in the diffuse gray background. In her hand a linden petal in front of her body. 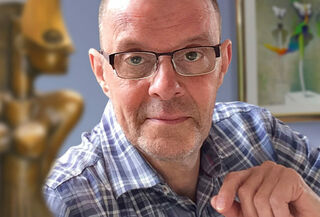 Michael Becker was born in Oldenburg in 1951, completed an apprenticeship as a display designer, studied graphic design in Bremen and then worked as a graphic designer in advertising agencies.
In addition to commissioned work in advertising design, image editing and illustration, his special interest has always been art. As early as the 1990s, his work could be seen at exhibitions in Bremen, Hude, Soltau, Berlin, Frankfurt, Constance, Luxembourg, Brussels and various art fairs. Since 2004 he is a freelance artist.The artistic work of Michael Becker is characterized by a variety of techniques. He draws, paints and works in wood, putty, ceramics and has models cast in bronze. In his imaginative and surrealistic works, he combines man and nature with erotic allusions and hidden symbolism. In the process, the female body often becomes the playground of his imagination, because for him nature has the essence of a woman: inspiring, fascinating, impressive and full of transformations.Influenced by his work as a graphic designer, he always lets the idea first mature in his head before he realizes it in a mixed technique of ballpoint pen drawing, acrylic painting and airbrush technique. Under the motto "Art with pleasure" Michael Becker lets frivolous and humorous picture worlds arise, which on the one hand have parallels to the animal and plant world and often carry a touch of irony and humor. Above all, his art is meant to be fun. Despite all the strangeness of the compositions, it is particularly important to him to achieve a high degree of aesthetics and originality with his pictures.
Empfehlungen
product
A1000110688 Picture "Linda in the fog" (2015) https://www.artsolitaire.arsmundi.de/en/michael-becker-picture-linda-in-the-fog-2015-a1000110688/ https://www.artsolitaire.arsmundi.de/thumbnails/b2/e1/b1/1661718950/linda-im-nebel-as_28debc01affc8cbc5459b86c0dae9faa_20220828223550_320x320.jpg InStock 1200 EUR A woman's body in the diffuse gray background. In her hand a linden petal in front of her body. /Pictures /Pictures/Art Style /Pictures/Theme /LP /Pictures/Material / Medium /Artists /Pictures/Art Style/Illustration /Pictures/Theme/Women /Pictures/Art Style/Figurativ Art /LP/Acrylic /Pictures/Theme/Humour /Pictures/Material / Medium/Airbrush /Pictures/Material / Medium/Acrylic /Pictures/Material / Medium/Ballpoint / Rollerball Pen /Pictures/Theme/Nature /Pictures/Art Style/Naturalism /Pictures/Material / Medium/Paper /Artists/Künstler-Detailseite /Pictures/Material / Medium/Wood /Pictures/All Pictures Michael Becker Acrylic, Airbrush, Ballpoint/Rollerball Pen | Paper | Format 50 x 35 cm (H/W) Michael Becker 0 0 0 1 1
Foundation Modal

Inroom view
Select your cookie settings
We use cookies and similar tools to enhance your shopping experience, provide our services, understand how customers use our services so we can make improvements, and display ads. Approved third parties also use these tools in connection with our display of ads. For more information about cookies and how we use them, please click "Configure settings". There you can also manage your cookie preferences.
Currency calculator
Price in EUR
€1,200.00
Exchange rate:
Stand:
The service is currently unavailable.